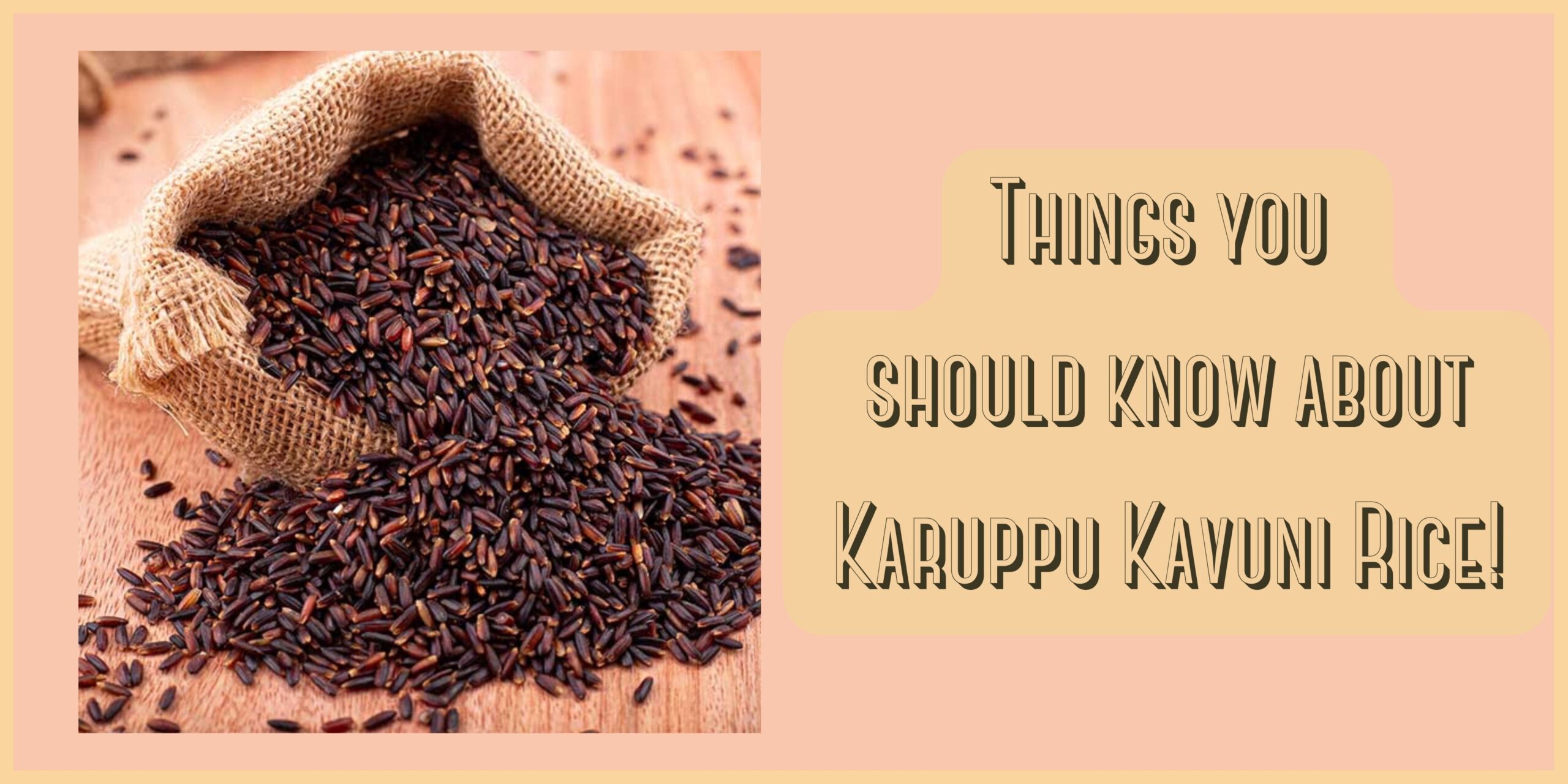 Things you should know about Karuppu Kavuni Rice!

The benefits of the Karuppu Kavuni rice are expounded comprehensively in this post. Karuppu Kavuni Rice is a form of traditional variety of rice that pertains to the Oryza sativa L. species and is also known as forbidden, purple, or black rice. All the benefits of traditional rice varieties are present in this rice, plus a few more.The pigment known as anthocyanin, which possesses powerful antioxidant qualities, is responsible for giving black rice its distinctive black-purple colour. It is stated that only members of China’s royal family were allowed to eat black rice in ancient times since it was deemed so exceptional and healthy. Today, black rice can be found in various cuisines throughout the world because it has a mild and nutty taste, a chewy texture, and several nutritional advantages. Black rice is prepared in the same way as other varieties of rice, and it may be utilised in a wide variety of savoury as well as sweet meals.

The anthocyanins found in black rice may have influential anticancer properties as well. A study of population-based research showed that eating more anthocyanin-rich foods was linked to a decreased risk of colorectal cancer a form of cancer. In addition, a test-tube study discovered that anthocyanins from black rice lowered the amount of human breast cancer cells while also slowing their development and potential to spread. A valuable source of several essential nutrients is entailed in the benefits of the Karuppu Kavuni rice. The antioxidants lutein and zeaxanthin found in black rice have been demonstrated to guard your retina of the eye against possibly harmful free radicals. Black rice is inherently gluten-free, making it an excellent choice for anyone who has celiac disease or gluten intolerance. Because black rice is high in protein and fibre, it may assist in weight loss. Furthermore, animal studies have revealed that anthocyanins may help with weight loss. Black rice might assist people with type 2 diabetes reduce their blood sugar levels and lessen their chance of NAFLD (non-alcoholic fatty liver disease).

Antioxidants are substances that shield your cells from the damaging effects of oxidative stress, which is generated by molecules known as free radicals. The benefits of the Karuppu Kavuni rice comprise a high concentration of antioxidants. They are essential because oxidative stress has been linked to an increased risk of various chronic diseases, like coronary artery disease, causes of Alzheimer’s disease, and several types of cancer. Research demonstrates that black rice has the highest total antioxidant capacity and activity compared to other forms of rice, even though black rice is less popular than other types of rice. In addition to anthocyanin, it has been shown that black rice contains around 23 plant components with antioxidant characteristics. Some of these plant compounds include flavonoids and carotenoids in their various forms. As a result, including black rice in your diet may be a simple approach to increasing the amount of disease-preventing antioxidants consumed through your diet.

The pigment known as anthocyanin is responsible for giving forbidden rice its dark purple and almost black colouration. In addition to this, research has shown that it possesses powerful anti-inflammatory, antioxidant, and anticancer properties. In one 12-week research of 120 people with high cholesterol levels, taking two 80-mg anthocyanin capsules per day resulted in dramatically enhanced HDL (good) cholesterol levels and substantially lowered LDL (bad) cholesterol levels.

Improving one’s cardiovascular health is contained in the benefits of the Karuppu Kavuni rice. Flavonoids, such as those found in black rice have been linked to a reduced risk of developing cardiovascular ailment and a lowered chance of dying from heart disease. In addition, preliminary research conducted on both animals and people hints that anthocyanins may assist in reducing the levels of triglycerides and cholesterol in the body. Antioxidants are found in black rice, and research has shown that these antioxidants can help safeguard against heart illness. In addition to being a rich resource of iron, protein, and fibre, black rice also has very high levels of several different antioxidants.