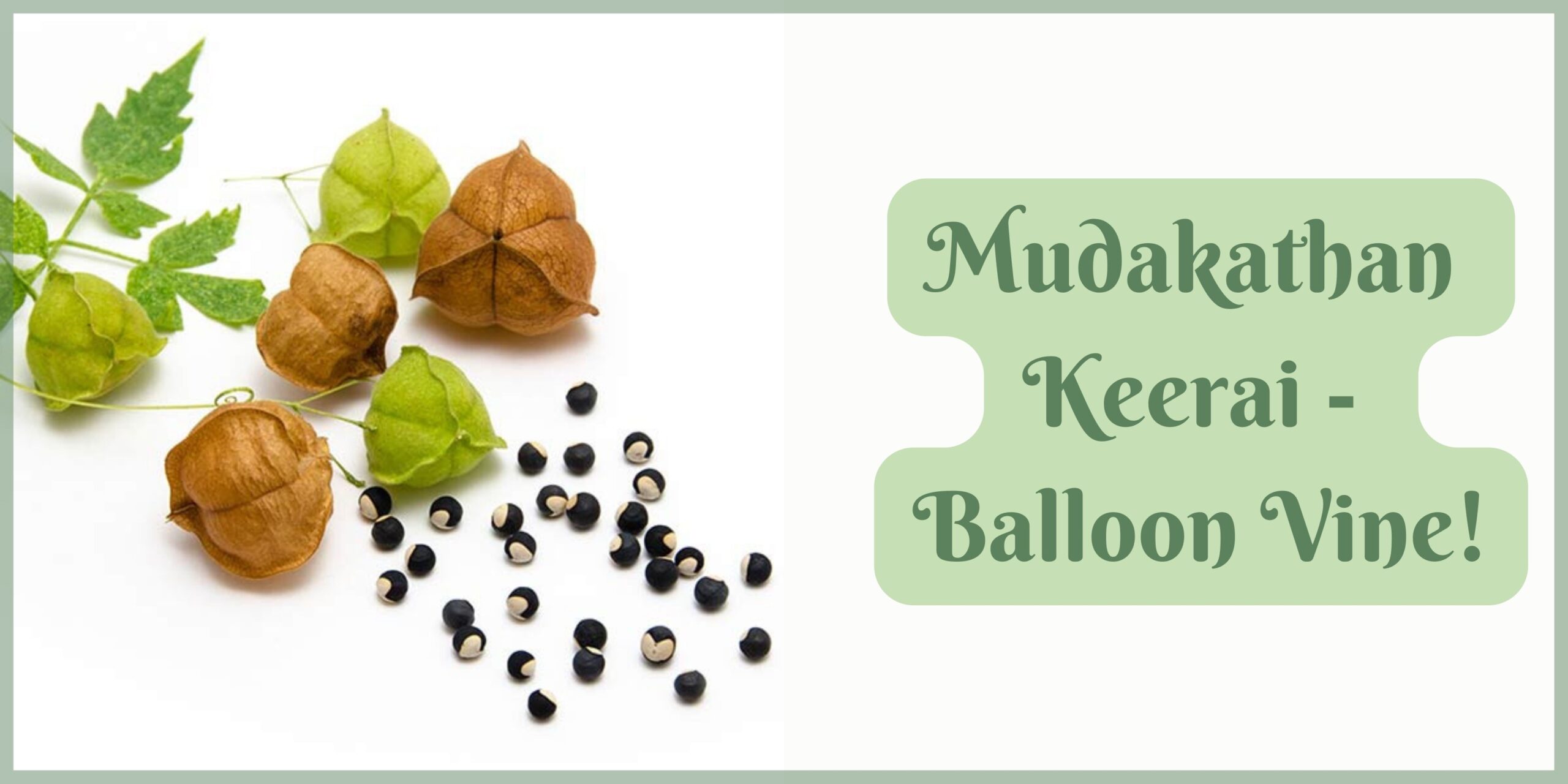 The benefits of Mudakathan Keerai are described in detail in this post. The balloon vine plant is called “Mudakathan Keerai” in Tamil. In Tamil Nadu, where this plant grows, it is well-known for its ability to ease joint pain. “Cardiospermum Halicacabum” is the name of this plant in the scientific world. It is termed “Jyotishmati” in Malayalam, “Agniballi” in Kannada, “Budda Kakara” in Telugu, and “Kanphata” in Hindi.

Adding mudakathan keerai to our diet is an excellent idea because it has so many health benefits, can be used as a medicine, and is just good for our bodies. It is especially well-known for its ability to relieve joint pain and help hair grow. We can use fresh mudakathan keerai leaves and dried mudakathan powder in many home remedies.

Mudakathan keerai has significant antibacterial activities that are present in all parts of the plant. These characteristics are beneficial against five distinct bacterial types (Salmonella, Aeromonas, E.coli, Staphylococcus Aureus, and Pseudomonas). Surprisingly, the seed coat contains the highest concentration of antibacterial properties.

Increasing fertility is one of the benefits of Mudakathan Keerai. The ability of mudakathan keerai to increase sperm motility and quantity is an intriguing feature of this medicinal plant. Simply eating mudakathan keerai regularly for thirty days results in a significant increase in sperm count and serum testosterone level.

Mudakathan keerai also has anticonvulsant properties. The administration of mudakathan keerai alcohol extracts with the rats greatly reduced the intensity of their convulsions. The whole plant extract was used in the extraction process, and the recommended extract dosage was 350 milligrammes per kilogramme of body weight.

Mudakathan keerai has powerful antioxidant and anti-inflammatory properties due to the presence of glycosides, flavonols, and phenols. It is very efficient at lowering inflammatory levels caused by a wide range of illnesses because it also has analgesic capabilities, which tend to relieve pain.

Having antidiarrheal properties is included in the benefits of Mudakathan Keerai. The antidiarrheal potency of mudakathan keerai aqueous extract has traditionally led to its use in specific parts of India. These areas include people afflicted with persistent diarrhoea. This has been proven through research, and it is due to the presence of saponins, triterpenes, sterols, alkaloids, flavonoids, and tannins in Mudakathan keerai.

Mudakathan keerai has fever-lowering properties as well. It is also one of the best promising treatments for fever caused by malaria. If you have a cold, a fever, or a headache, try a cup of warm mudakathan keerai soup.

Mudakathan keerai has a long history of use in the treatment of arthritis in our culture, and recent research has offered support for this age-old practice. Patients with arthritis are often given mudakathan keerai regularly in the form of dosai or rasam, which dramatically helps reduce inflammation and discomfort.

A diet high in fruits, vegetables, and leafy greens will assist you in maintaining a healthy lifestyle.

Mudakathan, when applied topically to the skin, has the ability to protect against mosquito bites, which is another intriguing application for this herb. The three mosquito species used in the study were Aedes aegypti, Culex quinquefasciatus, and Anopheles stephensi. The ethanol leaf extract was found to be highly effective in warding off the bites of all three.