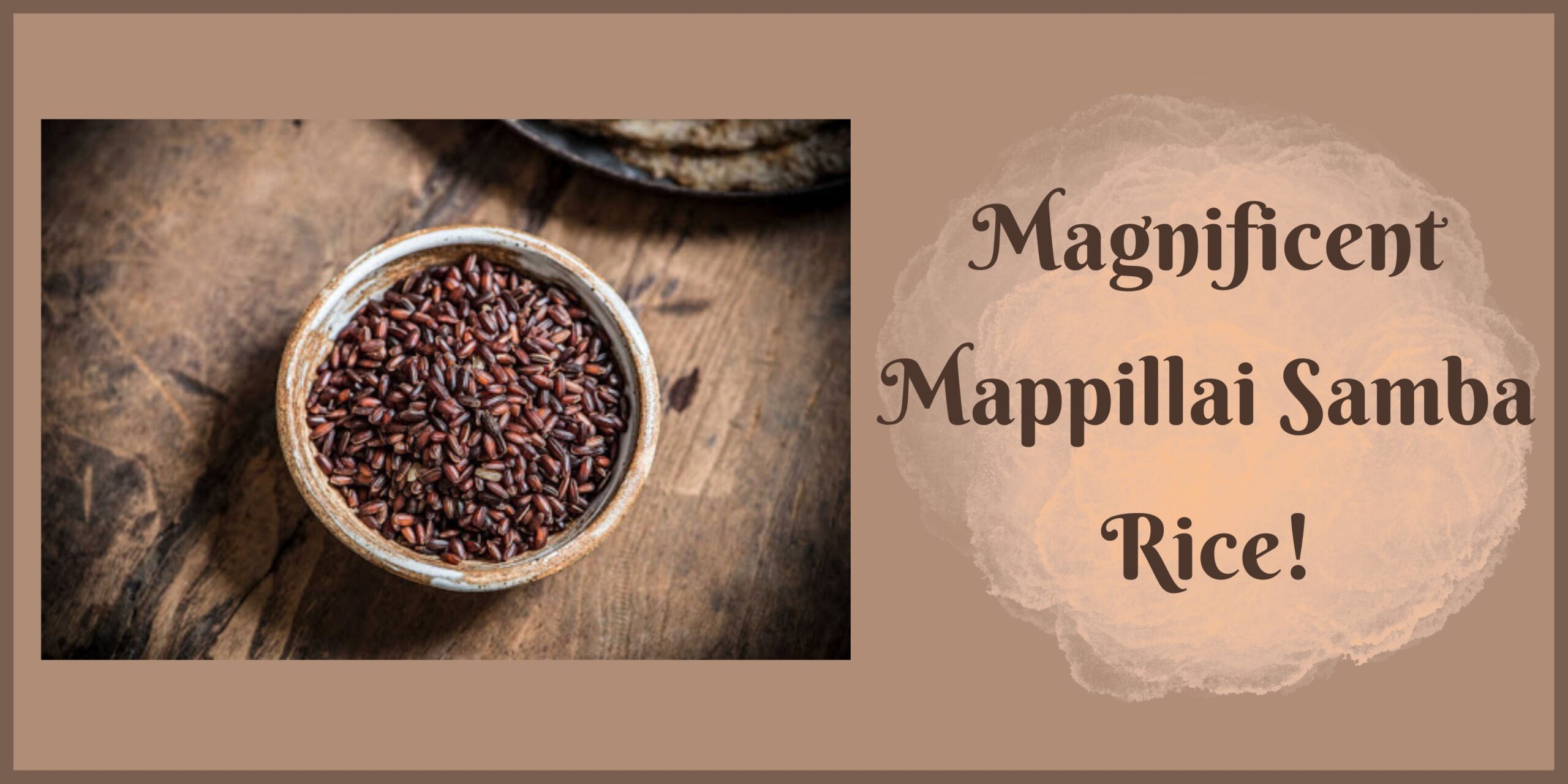 The benefits of Mappillai Samba rice are expounded comprehensively in this post. It is a type of native rice grown in South India, especially in the state of Tamil Nadu. This kind of rice is also called Energy rice and Bridegroom rice.

Rice is usually grown from August to January, which is also known as the samba season. There is no requirement to use pesticides when growing this rice. The grain is tough and durable and full of important nutrients.

In addition to being good for people’s health, it is also good for the environment. For example, it improves the soil’s fertility and its potential to hold water.

Also, this rice has a lot of mineral zinc. This helps wounds heal faster and keeps the body’s defences working well. Together, iron and zinc increase the amount of haemoglobin in the body, which helps strengthen all of the blood vessels.

This type of rice is called “Bridegroom Rice” because the groom is supposed to show his strength and virility by carrying a big rock. Before the real rock lifting competition, the grooms are given Mappillai samba rice to eat so that they can get stronger and have more endurance.

This grain’s name, “Energy Rice,” says it all! This rice has a lot of manganese, which gives you a lot of energy almost as soon as you eat it. It also makes the muscles in the body grow and become stronger.

Reducing cholesterol is entailed in the benefits of this rice. The pro-anthocyanins in this rice help lower cholesterol and hyperglycemia. If plaque builds up in the arteries, it blocks them. This can lead to several health problems, such as peripheral artery disease, coronary artery disease, stroke, and problems with the kidneys. Regular use of Mappillai samba rice has been shown to reduce plaque buildup in the arteries caused by atherosclerosis.

It consists of a lot of iron and vitamins, which help make RBS, which stands for red blood corpuscles. Our respiratory and circulatory systems need red blood cells to work well. Iron is an important part of making both myoglobin and haemoglobin. Myoglobin and haemoglobin carry oxygen to the muscles and tissues of the body. This helps the body keep up its high level of energy.

Throughout the Sangam period, the kings and queens served their guests half-cooked Mappillai samba rice, which appeared to be the standard at the time.

Vitamin B1 is found in this rice, which helps ulcers in the mouth and stomach heal. This rice boosts the speed at which the blood flows through the body, giving our bodies a quick energy source. If the younger ones eat this rice often, their muscles will grow, and their immune systems will strengthen as those who consume organic foods.

Why should we use Mappillai Samba rice?

It is a great choice for organic farming because it is a resilient plant that requires little to no fertiliser or pesticide, which has numerous harmful consequences. This crop is ready to eat after about 160 days. Unfortunately, Mappillai samba and other native types of rice are almost gone from our farms and markets. White rice, which is heavily processed and less healthy, has taken their place.

This rice has a lot of fibre, which helps with digestion and gets rid of upset stomachs. In addition, it prevents stomach disorders like gastritis, diarrhoea, and constipation.

Controlling diabetes is encompassed in the benefits of Mappillai Samba rice. This indigenous rice has a lot of magnesium and vitamin B6 in it. Magnesium helps control the amount of sugar in our blood, keep our hearts beating at the right rate, and keep our immune systems healthy.

Today, only a few traditional farmers who love what they do still grow rice this way. This variety of rice is bred in the state of Tamilnadu in a place called Thiruvannamalai.